From the pictures taken after it was enlarged at the turn of the century, the Skotschau synagogue in Austrian Silesia looks like a modest structure. The only decorative element is the small columned porch that projects at the front. Arched windows framed by simple sandstone surrounds mark the two stories on the sides. Perhaps the color of the stone gave the building more presence, but there is no way to tell now since the synagogue was destroyed in 1939
That day in 1901 when Skotschau’s newly expanded house of worship was re-opened was particularly meaningful for great-grandfather David Spitzer who had led the community for more than forty years. Like many young Jewish men freed from residence requirements in the Austro-Hungarian Empire after the revolution of 1848, he had left his birthplace in Terlicko, Moravia, at the age of twenty-six for opportunity elsewhere. In David’s case, it was marriage to Rosa Lindner, the daughter of a successful dry goods retailer, that led to his taking up residence in Skotschau. The Lindner shop, fronting the town square, had been in existence since 1820.
From what we know of David’s later history, a flourishing Jewish community also beckoned. The Skotschau Jews had done so well that as early as 1850, they were able to build a small house of prayer. Though they lacked the privileges of independence–taxes were paid to the official Jewish community in Cieszyn which had permission to hire the itinerant rabbi and keep the birth and death records–the building reflected their affluence and cohesion.
Once settled, David, exhibited the independence essential for an entrepreneur. He did not join his new in-laws’ flourishing business, but set up on his own as a tanner. He must have had some experience in the profession, since he recognized in Skotschau all the requisites for the process of transforming hides into leather. The two streams that ran through the town provided sufficient water for soaking, while the oak and spruce trees in the surrounding woodlands were a source for the vegetable tannin essential for curing. Raw skins could be acquired from the slaughter houses in the nearby towns of Cieszyn and Bielsko and trade was eased by the nearby Emperor’s Road which ran through the area from Vienna to Krakow and on to Lodz. The business developed apace and when, in 1875, David acquired a former brewery, he was able expand his workshop into a full-scale factory. The tannery was soon the largest employer in town. 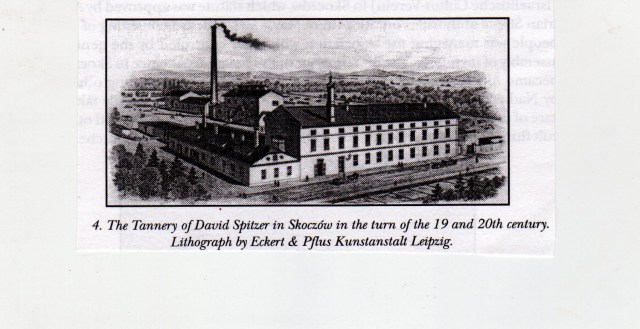 David proved to be a leader with energy to spare. In the tradition of the court Jews who deemed it a matter of honor to use their privileges and influence to protect their co-religionists, so the industrial elite at mid-century took it upon themselves to give financial and managerial support to their burgeoning religious communities. At the same time that he was expanding the tannery, David was serving as the head of the Skotschau Religious Alliance which oversaw the Jewish communal property, supervised the kosher butcher and cantor and ran a small religious school.
In 1892, the growing number of Jews in cities and towns throughout Austria convinced the government in Vienna to introduce a new territorial division of the Jewish communities. Skotschau was given its independence and put in charge of a district which included more than 600 Jews. Creating an organization capable of handling these new responsibilities was tantamount to setting up a local government from scratch. It was David who steered the community through the process. As head of the electoral committee, he had to determine which Jews had sufficient income to be taxed and were therefore eligible to vote for the members of the new administration. Once elected head of the managing board, he performed this function, without pay, from 1893-1902 and, once again from 1905-1908. It was under his first term that, over a period of six years, the official statutes were written spelling out in complete detail how the community was to fulfill the religious needs of its members.
With the re-dedication of the synagogue in 1901, the Jewish house of worship took its rightful place in Skotschau alongside the Catholic and Protestant churches. More than a symbol of the success, growth and official status of the community, the building reflected a Jewish minority that, at the turn of the century, was unusually integrated into Skotschau’s mixed population of Polish Catholics and German Protestants. Working as industrialists, lawyers, doctors, and merchants, Jews were also members of the town council, volunteers in the fire brigade, members of the all-male glee club. A local string quartet was divided equally between Polish and Jewish players.

1 Response to Commerce and Community