The discovery I alluded to in my last post–”Vienna on the Vistula”—came my way by sheer chance. In 2004, working on a paper about Gustav Klimt and the Vienna Secession, I paged through Eduard Sekler’s monograph on Joseph Hoffmann. Perusing the index, the name Sinaiberger suddenly caught my eye. Sure enough, my aunt and uncle had turned to the Austrian architect to help design their villa in Skoczòw in 1933. Eager to know more, I wrote to the Hoffmann archive in Zug, Switzerland, and received copies of all his drawings for the project.

Once a leader of Austrian modernism at the turn of the century, Hoffmann was no longer in the forefront by the 1930’s.  This can be seen in his plan for a house designed on a north-south axis with a pitched roof, an arched loggia and an oriel window. In the end, someone with another vision intervened in the construction of the villa, but Hoffmann’s concept for its setting: the stone-walled garden terrace running along the east side of the building and the patio with a small pool to the south was kept.

As built, the villa has a flat roof and Hoffmann’s loggia, and what was to have been the winter garden below, became an upper terrace shading a patio. This terrace matches the one on the north side of the facade with which Hoffmann had crowned the separate wing designed to be Sinaiberger’s studio. In the constructed version, the studio is integrated into the facade and given a large window. The upper story, now framed by two terraces, is made an integral part of the central block with a grouping of three windows that is equal in size to the great picture window below.  As a result, the shaded patio, the central feature, and the atelier now read as one extended unit. Seen from below, the facade bears a startling resemblance to a nearby modernist icon a short distance away in Brno, Czechoslovakia, close to Frederick Sinaiberger’s hometown Ivancice.  Only a few years before—between 1928 and 1930–the pioneering German architect Mies van der Rohe had completed the Tugendhat House there. The Tugendhats were acquaintances of the Sinaibergers. Was the new designer of the Sinaiberger villa inspired by Mies van der Rohe’s domestic masterpiece? 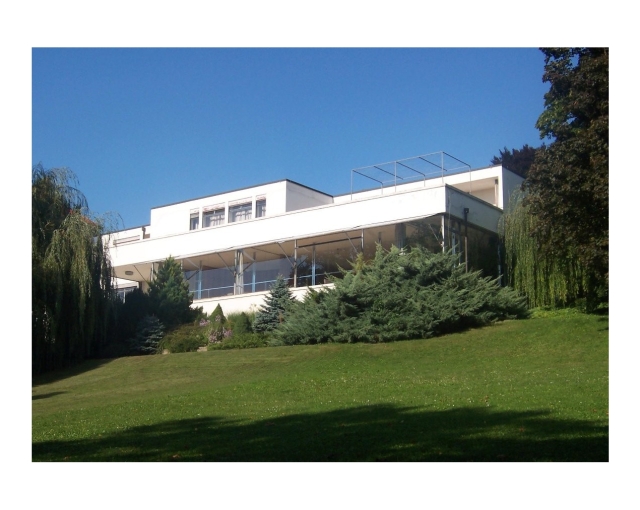 Even if this last query remains a supposition till more evidence can be found, just the names associated with the Spitzer/Sinaiberger patronage—Sergius Pauser, Josef Hoffmann, Jacques and Jacqueline Groag, and our anonymous Mies-inspired builder—suggest the rich cultural milieu that flourished too briefly on this Silesian hillside.

This entry was posted in Uncategorized and tagged architect mies van. Bookmark the permalink.

4 Responses to The Missing Architect