Until the spring of 1940, the members of my family who had arrived in England believed they were safe from Hitler’s designs on the Jews. From April on, however, as the German leader, in a matter of months, successfully invaded and conquered six countries—Norway, Denmark, Belgium, the Netherlands, Luxembourg and France—they began to feel they had not fled far enough. By the end of May, the British were evacuating more than 300,000 troops from the French beaches at Dunkirk. Could there be any doubt that Hitler saw England as his next prize?

But where and how could the family run? The grandparents—Emma and Emanuel Spitzer—were too old, my mother’s teen-age sister Franziska, who had arrived on a Kindertransport from Vienna, too young, and my parents were nurturing a newborn. The only ones capable of leaving were Helen and Fritz, my father’s sister and her husband. So dire did the situation seem, they were willing to risk an ocean voyage to Panama even if it meant sailing through waterways infested by German submarines and protected by only the smallest of convoys after the many British naval losses in Norway.

Helen kept a diary during that voyage and the six months that followed in Central America. She and Fritz, and their beloved dog “Darki,” boarded the Napier Star, at Tilbury on the Thames on June 17, 1940. The cargo ship, making for Liverpool, Panama and New Zealand, had room for seventeen passengers.

After several days spent gathering a convoy, the ship had just moved out of the English Channel when submarines were sighted. The Napier Star sped hurriedly away in a zig-zag course, but two of the accompanying boats were torpedoed. With passengers on deck in life-jackets,  a hair-raising  two hours followed before escape was considered assured.

Thereafter the voyage was peaceful, a brief respite from the fears of the past and the insecurity of the future. As they headed south, it was possible to swim in a small pool on board, play deck tennis, and converse with the crew. Passengers were given a tour of the ship from the bridge to the machine room, and shown the navigational instruments,  the many maps. Once in the Caribbean, they sailed past Curacao and Aruba, and, after a farewell champagne dinner,  arrived in Colon on Panama’s east coast on July 7.

The town made a bad first impression on Helen. Half of it had recently undergone a fire and everything seemed dusty and ugly to her. And her travel experiences in Europe had not prepared her for the the racial diversity of the population “Negros, Mulattos, Japanese, Chinese , mixed races of every sort ” overwhelm her. Initially, only the rich vegetation and the tropical colors give her comfort. In this new world, and without any knowledge of Spanish, she now had to deal with a daunting two-fold task: Find a country that would allow them a temporary stay and, at the same time, pursue the ultimate goal of a U.S. visa.

At first they had their eyes on Ecuador and Helen admits to the successful deployment of her feminine wiles in catching they eye of that country’s consul. Then it became clear that Panama, with its strong American presence in the Canal Zone, would be a better bet. After endless machinations and a move to Panama City, permission to stay was finally granted. Only then did Helen gradually adjust to her surroundings. She recognized the appeal of Colon as a harbor town and–its variety of bars and nightclubs. As bad as the performances in the latter were, she enjoyed observing the artists and the audiences. She even begin to take Spanish lessons, but the news from Europe left her no peace. The diary is a record of desperation. Again and again she rues the day she left the family in England where the Battle of Britain had now begun to rage fiercely and London was under constant attack from the Luftwaffe. Letters took far longer to arrive than news of the latest bombing raids.

Especially distressing during those weeks of waiting, was the news that the Napier Star had been torpedoed and sunk on December 18 while on its return voyage.  The captain, fifty-eight crew members, and twelve passengers were lost. “Poor, beloved, old ship,” Helen wrote,” I remember it as a good friend. Each member of the crew remains in my memory.”

By the end of February, 1941,  Helen and Fritz were finally on the way to New York. The trip, via Guatemala, Mexico, and across the States, took two months.  Only when that journey ended did Helen receive the sad news  that her father, with whom she had been very close, had died in March.   She was heartbroken. “He was buried far, far from me in foreign soil,” she wrote. “I couldn’t say good-by, not even at his grave.”

The last entry in the diary dated June 14, 1941, marks a year since her departure from England. “Perhaps I am ungrateful,” she concludes. “My life today is varied and has tempo, but something that should fulfill me is missing. Something that would have made the hectic journey worthwhile. Is it the pressure of the war and the world situation? Or the worry about all the danger my loved ones are in? Or, above all, the misery of losing my father, or what it will be like when I am re-united with the others? Today we got a wonderful new car. I have what I want and need and yet I seldom feel a spark of pleasure.” 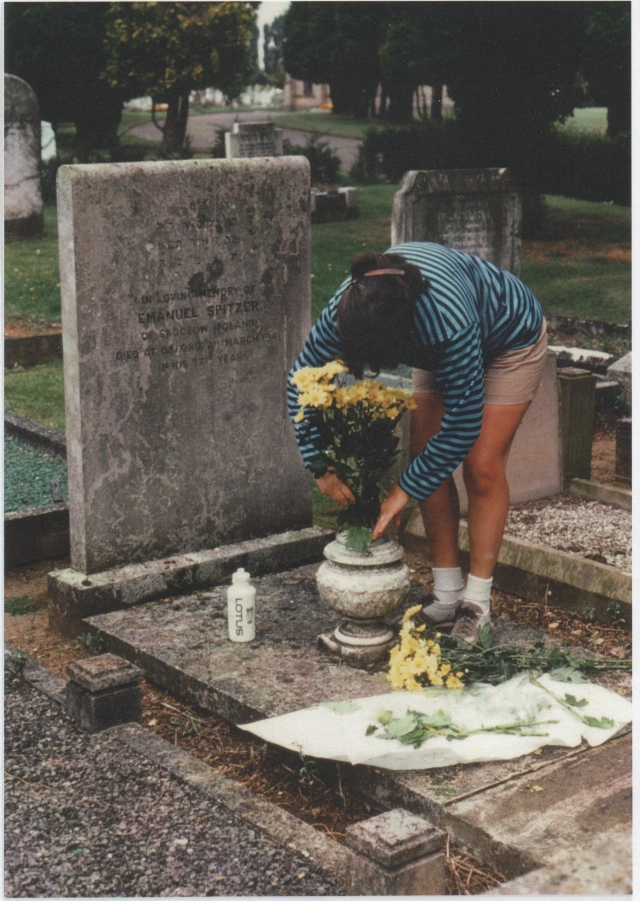 1 Response to A Dangerous Voyage